Today we said goodbye to our dear friend and life companion, Danpo. Danpy, as we called him, was a Tibetan Terrier just a few months shy of his 15th birthday. He spent the last year and a half living with congestive heart failure. Fortunately, there was medication that made the better part of that time fairly manageable for him. But like all living beings, his time eventually came to an end.

He was a great teacher, the way that all pets, certainly all animals, are great teachers. He lived every moment in the present. He found joy in the simple things. He gave and received love. And he left this life with grace and nobility.

One of the most challenging aspects of having a pet is the fact that they nearly always predecease us. They come into our care, usually, as helpless infants. Dogs grow quickly through the life stages, lapping us almost a decade to the year. Danpy came into the world the same year my partner’s fraternal twin grandchildren, today healthy adolescents still growing through their puppy stage with spurts in height, changes in their bodies and minds. While they still have six or seven decades to look forward to, adulthood, relationships, families of their own, Danpy, at their age, was a very old man with an old man’s illness and limitations.

We managed his illness the best we could. He got his pills twice a day, doses fluctuating to meet his symptoms. When he tired of cheese to disguise their medicine, we switched to liverwurst. When liverwurst failed, we switched to canned dog food. When the canned food finally ceased to help the medicine go down, when he turned his face from the pills that were keeping him alive, the message became clear. It was time for him to leave us.

It’s extremely difficult to make the decision to end a pet’s life. If we’d kept pushing the pills down his throat, he may have held on a little longer. But well before we got to this stage, we knew it was time to help him pass. An appointment was made, the final realizations faced, the tears and heartache endured.

Euthanizing a pet often feels like playing God. Who are we to make the decision to end a life? And yet, if we are sensitive and attentive to their subtle communications, our pets will often help us to know when the time has come. With his final vet appointment thirty-six hours away, this morning, Danpy’s symptoms worsened with heavy wheezing and labored breathing. My partner called the vet, and we took him in.

His passing was like his living. A little stubborn, in his own way and time. The intramuscular sedative was slow to work, and the final injection as well. We held his head, hands on his small chest and felt his heart beating, beating, beating, slow, fade and stop. He was at rest. We bundled him up like a papoose and carried him to the car, to his bed and set off for the two hour drive to the pet crematorium.

It’s early winter here. There are a few feet of snow on the deeply frozen ground. Burying an animal at home, interring Danpy up the hill by the family dog Chica who passed not long after they moved here, was not an option. The only truly suitable choice was to put him in the car and take him to be cremated.

It was a moody overcast day here in our valley. And it was a blessing to have the time to integrate the loss of our dear pet. We drove along the Methow River to just before where it meets the Columbia, and there we paused, where we have often stopped on the long drive from here to most everywhere. We took Danpy’s collar and walked down to the frozen edge of our river for a brief ceremony of goodbye.

We called in the elements and directions and commended the spirit of our beloved one to the air, water, land and fire. We thanked Panchamama our mother Earth and the great sky that holds everything in its grasp. We thanked the great river of the first people, and putting his collar around a river rock, we cast it out through the thin ice where it broke loose and fell into the current pulsing along, Methow to Columbia to the seas.

From there, we met the highway and drove the rest of the way to our destination. It was a quick and kind transaction. A bighearted man with a shaved head came out and lifted him from the car, bed, blanket and all. We kissed his furry head and said our final goodbyes.

There are those who might scoff at all of this love and grief and ceremony for an animal. But there are those of us who know that the great spirit inhabits every form of Being. There is no reason in denying its truth. If we attend to this life, then we will be met by the divine nature in everything that inhabits this world. And everything is our teacher.

The greatly beloved American poet Mary Oliver has said it so succinctly: To live in this world you must be able to do three things: to love what is mortal, to hold it against your heart as if your own life depends on it, and when the time comes to let it go, to let it go.

Goodbye Mr. Danpy. Petit Prince. Little Noisette. Blacky. Petit chien. Buddy. Teacher. Friend. May I go as gracefully as you have gone, down the trail, over the snow, into the beyond. 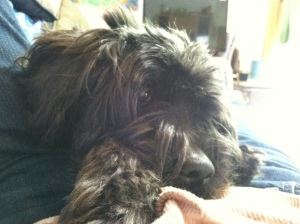 4 thoughts on “To every thing there is a season, and a time to every purpose under the heaven: RIP Danpo”